The dust is literally still settling from what feels like an eternity of moving, but I can finally say that I am officially on break. Though the weather may indicate otherwise, the summer months are upon us. For those in denial, you need look no further than your nearest and dearest cinexplex, movieplex, Netflix, or any other form of Costco-sized movie dispensary to know that it is in fact the best time of year: the season of summer blockbusters. Who needs warm weather when we can all huddle together in the darkness and watch chicks romantically yet comically find love, see the latest Marvel hero acted out in real-life spandex, or be able to see any and all things in 3D? 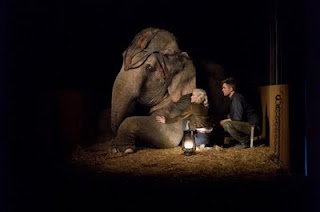 My personal summer movie season opener was the latest New York Time’s Bestseller turned Hollywood glitz, Water for Elephants. As a former trapeze artist hopeful, I was particularly excited for a movie about the old-timey circus. Unfortunately, not even R. Patz dressed up in drag with classic clown makeup and a stick on nipple tassel could save this film. Though the script stayed close to the novel, the allure and enchantment of the circus did not make it to theatres. The tale featured a particularly exceptional pachyderm but the real elephant in the room was the lack of chemistry between the main actors. Despite Witherspoon’s charms, Waltz’s nightmare inducing villains, and Pattinson’s infamous women-luring ways, the trio felt forced. Perhaps I am overly critical because I loved the novel so much, or perhaps I am just bitter because unlike the main character, I never mustered up the courage to run off and join the circus. However, as the credits rolled, I couldn’t help but feel that this act should’ve remained on the best sellers list rather than the big screen.
Posted by Ishani at 7:41 PM