Last weekend, our family trio decided to escape the confines of suburbia and drive up to Quebec City. The trip was an attempt to get out of the house and relax for a weekend with the fun-filled French.

Qualms and Concerns
I have only been to Quebec City once before, and that trip resulted in some unpleasant memories. Visiting lil’France was my grade 10 academic field trip. The trip was doomed from the start because our chaperones included the three most insane French teachers in the school. Our rooms were taped shut every night so that if we left after curfew, the gestapo would know. To discourage any creative escape attempts, the teachers also had Gary, our mountain-troll-like bus driver, sit in the hall and watch our doors. I remember wanting to attempt to break out just so I could witness Gary try and attempt to heave his 300lbs fast enough to catch me. When we were let out of our cells, the sightseeing destinations were more random than a raccoon in a plaid tutu. The trip was a hazy blur of Swedish themed hotels, maple butter tastings, battle reenactments, Church gift shops, and haunted barns. Overall, the trip didn’t give me the greatest impression of the City of Quebec. 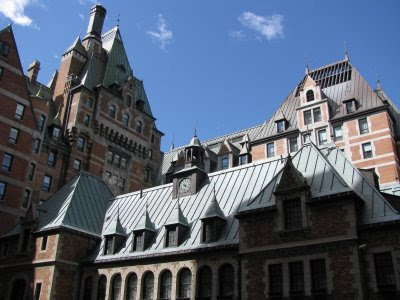 Quaint and Cultured
I suppose that when your expectations are lower than low, you set yourself up for a pleasant surprise. The 2.5 days spent wandering the European style city were perfect. The cobblestone streets of old Quebec City are lined with charming houses turned restaurants, cafes, and boutiques. The weather was glorious and each day we were able to see new sights around the city. Our city tour was aided by the Ecobus, a tiny box-like bus that runs completely on electricity. The bus rans on a constant loop around the old areas of town and is completely free. For those who are worried that they will end up speeding past all the good sights, the bus runs at a solid 33 km/h, so there's no speeding past anything.

This trip, I learned that this city was made for me. Not solely because of its love of crepes and chocolate fondue, but also because of its abundance of tiny doors. Apparently the first settlers of the QC were mini sized. As a result, the old city is speckled with doors that only reach a height of 5ft 5. Between Simons, the horse drawn carriages, and the exotic menus of caribou and boar meat, I found myself smiling. For the first time, in a long time, this trip felt like a true vacation.
Posted by Ishani at 7:20 AM