This past weekend was Ottawa’s first annual South Asian Festival. While this was the festivals’ big debut, it was also a personal grand finale. It was the last time that Anisha and I would perform together this summer.

As seasoned veterans of laziness, we met up before the performance to ‘practice’. After two hours of chatting, we did one run through and then started the drag queen transformation known as stage makeup. Amidst the hair straightening and liquid eye-lining, we found ourselves running late. In the frenzy to leave the house, we decided that we didn’t have time to make a back up CD of our music. After all, the organizers had confirmed that they had our music so we figured we’d be fine. 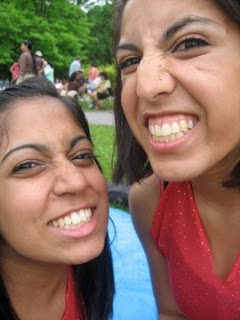 We finally arrived at the festival, but things were of course running on “Indian Standard Time” which meant that the performances were an hour behind schedule. When it came time for our performance, we went backstage. Right before we were about to get announced, the organizers came up to us and said, “Hey, remember that time when we said we had your music…well, JUST KIDDING!” So, maybe they didn’t say those exact words, but basically our CD had wandered away.

Irony is like a Carnival Freak show; it’s entertaining as long as you’re not part of it.

Mass chaos ensued. My mum flew into stage mom mode and started harassing the organizers while everyone else whipped out their cell phones/ iphones/ blackberries/ laptops to try and access our song file. After an hour of frantic overuse of technology, the organizers came up to us and said, “Hey, remember that time when we said we lost your music…well, JUST KIDDING!” Again, potentially not the precise wording, but basically they had found our CD.

I don’t remember much of the performance, which is usually what happens when it goes well. Though we went on almost two hours late, the time lapse allowed a decent crowd to gather and we ended up being the last performance before rain took over the festival.

As soon as we came off the stage, two little girls ran up to us and asked for our autographs. I don’t think I have ever smiled so big. As we signed a card for them, the two girls fought over who looked more like us. I made a mental note not to let the flood of flattery go to my head.

On a sidenote: if you wish to book us for a performance in the future, you’ll have to have your people call our people because evidently we’re kind of a big deal.
Posted by Ishani at 11:07 AM